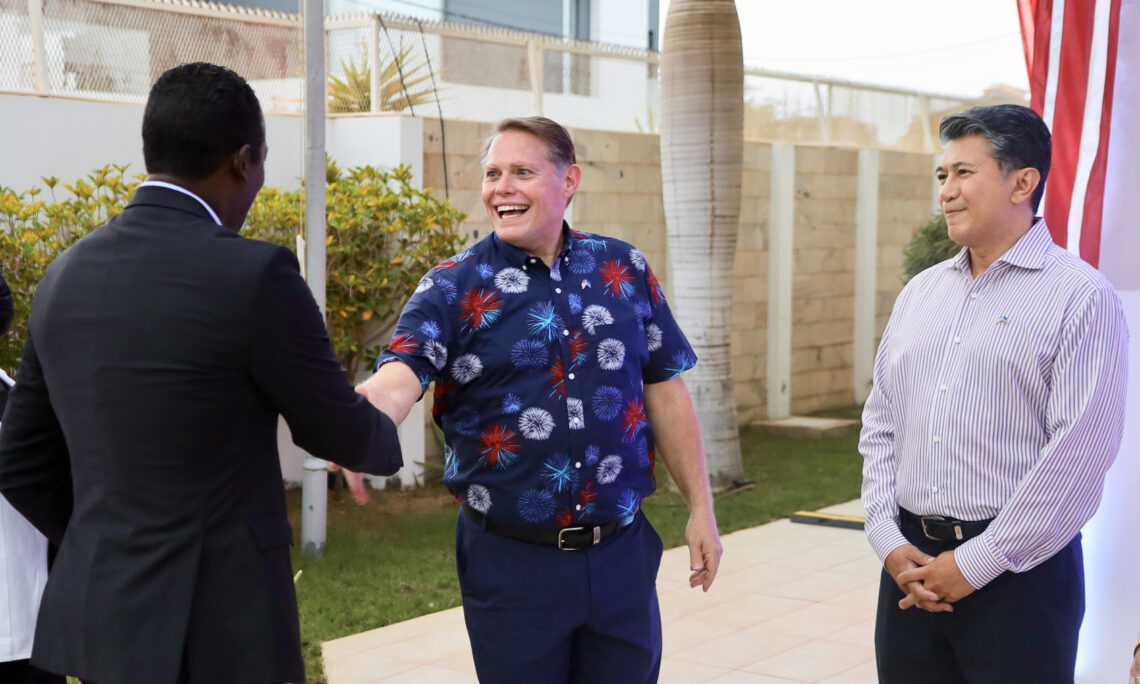 Our dear friends and partners in the government, diplomatic corps, business community and civil society,

My spouse Matthew and I are delighted to welcome you all back to the official U.S. Residence after an absence of more than two years!

A year ago we marked U.S. Independence Day with a small dedication ceremony for the land where the new U.S. embassy will be constructed, and I am very pleased to report that we are making good progress on this important project, with a large team visiting Praia and many other locations around Cabo Verde in April to begin the design phase and ensure the new embassy campus – a $439 million investment in the U.S.-Cabo Verde relationship – will be secure, sustainable, and reflect the deep historical and cultural connections between our two nations.

The reason we are able to gather here tonight is due to the model response that the Government of Cabo Verde mounted to the global pandemic, attaining one of the highest vaccination rates anywhere in the world.  Cabo Verde had the support of many good friends in this endeavor, but I am naturally very proud of the assistance the United States provided, including donating more than 400,000 doses of high-quality Pfizer vaccine, $700,000 to support the vaccination program, and the use of a U.S. air asset to help distribute the initial shipment of vaccine throughout all of Cabo Verde to ensure health workers were vaccinated quickly.  All Cabo Verdeans can take great pride in their country’s success bringing the COVID infection rate down from one of the highest in the world to among the lowest.

To support Cabo Verde’s economic recovery from the devastating impact of the pandemic, the United States has also provided approximately $2.5 million for co-investment grants to local businesses and is creating an impact fund with the Cabo Verdean government that is expected to stimulate nearly $16 million in additional investment, generate 3,000 jobs, and increase trade with the United States by more than 60 percent.

Speaking of trade, the U.S. embassy’s commercial team has been hard at work this past year, and over the past several years, promoting bilateral trade and providing a steady stream of support to U.S. firms interested in investing in Cabo Verde.  This effort has paid off with the United States becoming the third-largest source of foreign direct investment in Cabo Verde and the recent announcement of several important projects, including the signing of the first-ever investment MOU for the São Vicente special economic zone – a liquid natural gas bunkering project that promises to see millions of dollars injected into the Cabo Verdean economy and the creation of hundreds of good-paying local jobs.

In February, Cabo Verde and the U.S. state of New Hampshire launched a State Partnership Program between the Cabo Verdean military and the New Hampshire National Guard that will dramatically enhance the scope and magnitude of our military-to-military engagement.  The Governor of New Hampshire himself led the state’s delegation to Cabo Verde to launch this program, rather than the Commanding General, to signal that this new partnership will be a whole-of-state effort — encompassing many other areas, including commerce, education, healthcare, and civil protection – issues well beyond the scope of a typical military relationship.  Demonstrating his commitment, the Governor initiated a high school linkage and imports of Cabo Verdean products within just a few weeks of his visit.

And finally, highlighting the close relations between our two nations and the common commitment we have to democratic values, the highest-ranking U.S. delegation to ever visit Praia attended the inauguration of President Neves last November, and then in December Prime Minister Correia e Silva was one of only 12 world leaders that President Biden invited to speak at the plenary session he hosted to open the Summit for Democracy in December.

There are so many more milestones that occurred this past year that I could highlight, but as the saying goes, the best is yet to come, so I look forward to sharing news with all of you in the coming months of even bigger projects we are working with the Cabo Verdean government to launch.

Now comes a bittersweet moment for me in tonight’s program.  Our embassy’s Deputy Chief of Mission, Amanda Porter, will be departing Cabo Verde for her new posting in Lisbon next week.  Amanda played a pivotal role in each one of the success stories I talked about, and the entire U.S. embassy community and I owe her a deep debt of gratitude for her leadership, creativity, perseverance, and friendship.  Also departing next week is our Senior Rule of Law Advisor, Adam Pearlman, who was instrumental in nearly quadrupling our support for Cabo Verde’s justice sector over the past several years.  Both will be sorely missed, and I ask you to join me in a round of applause to show our appreciation for their extraordinary work on behalf of the U.S.-Cabo Verde relationship.

So that was the bitter part, now the sweet news is that the embassy’s new Deputy Chief of Mission, Margaret McElligott, and her spouse Kelsey Livingston, arrived in Praia just this afternoon.  Please be sure to say hello to Margaret and Kelsey tonight and join me in a warm round of applause to welcome them to Cabo Verde.

Now, I pass the microphone to the Vice Prime Minister of Cape Verde, His Excellency Olavo Correia.

Thank you Your Excellency for your heart-felt remarks.

Now I would ask everyone to join me in a toast.  Please raise your glasses in honor of the independence of our two countries, the United States and Cabo Verde, as we toast the U.S.-Cabo Verde relationship, now spanning more than 200 years.  May it continue to grow ever deeper and broader.  Long live the Fourth and Fifth of July!

Now for tonight’s main event, our Kriolu Kafe concert!  The U.S embassy began hosting these concerts, which are broadcast via Facebook, during the pandemic as a way to both highlight Cabo Verde’s incredible music as an important component of the country’s economy and to support Cabo Verdean musicians as they struggled with the economic impact of the pandemic.  With Cabo Verde and the rest of the world finally shaking off COVID’s impact and people able to gather together once again to enjoy in-person musical performances, we thought gathering our friends and partners together for one final Kriolu Kafe was the perfect way to honor the U.S.-Cabo Verde relationship and mark our annual July Fourth celebration.

And are we in for a treat!  We have some of the biggest names in Cabo Verdean entertainment — Solange, Zerui Depina, Sandra Horta and Djam – all performing with Bruno Lima and the incomparable Pret e Bronk band.  And we also have two of the U.S. embassy’s own – Nadia Barbosa and Alex Dennis — emceeing and sharing a few songs as well.  So, without further ado, take it away Nadia, Alex, and Pret e Bronk!