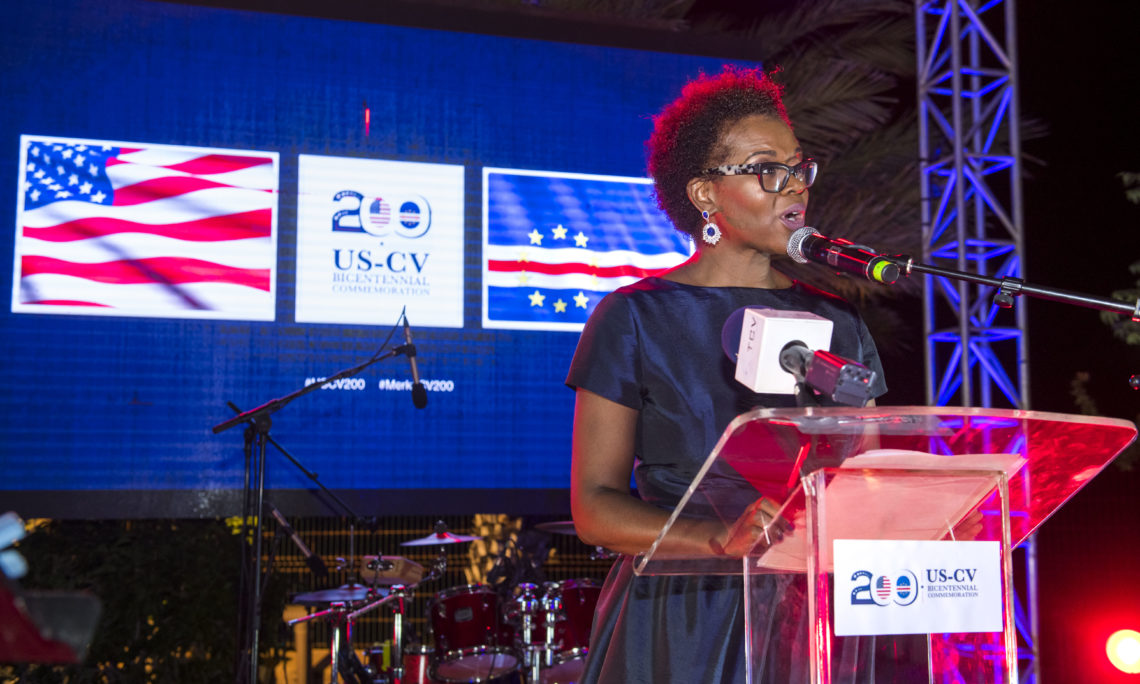 Good evening and welcome to our Bicentennial Gala honoring 200 years of historical ties between the United States and Cabo Verde!  There is no other place that I would rather be tonight than here with you!

Numbers can have very interesting meanings.  The number “2” symbolizes the duality and power of twinning in your life.  I, myself, am a twin and have always lived as part of a duo—a team of two with a built-in natural ally with whom I can exchange ideas and accept criticism.  “Two” signifies strong forces in life that are working together to help you achieve your goals.  The “zeros” help to magnify the vibrations of the numbers with which it appears.  Now, if you believe in numerology, this bicentennial has a very clear meaning—the relationship between the U.S. and Cabo Verde is symbiotic.

In the 19th century, whale oil was needed for lamps, and many whaling ships left New England in search of oil.  The whalers discovered that Cabo Verde was a great place to stop and get supplies and to recruit sailors for their vessels.  Because so many American ships stopped here, we opened a consulate in Cabo Verde in 1818.  You see, a symbiotic relationship is based on a genuine need that each one has for the other.  Cabo Verdeans were instrumental in the fishing industry in the New England and in the cranberry bogs.  Later, in 1843 the U.S. established the African Squadron in Cabo Verde to catch ships that were trading slaves.  The ships stayed until 1861—when the ships were needed for the Civil War in the United States.  Cabo Verdeans have fought in every U.S. war since the Revolutionary War that started in 1775 and ended in 1783.  That is before the United States became a country!

But the connection between our citizens are not just historical; we are making new connections everyday through our enterprising citizens and U.S. programs. We have guests here tonight who have traveled to the United States – many to study at universities or on professional exchanges like International Military Education and Training, the African Women’s Entrepreneurship Program, and Young African Leaders Initiative. And through such exchanges, we have seen new businesses, new partnerships, and new possibilities flourish in both our nations.

As we can see, there is a very profound and steady relationship between our two countries—that is not best expressed in words, but in deeds.  Tonight we honor and recognize that relationship.  We pay tribute to our past and the future of our relationship.

But first we want to thank our partners for sharing this important moment with us. We are grateful to have Major General Gary Brito come all the way from Georgia to join us this evening. A native of Hyannis, Massachusetts, the Major General made history this year, by becoming the first African-American Commanding General in the 100-year history of Fort Benning. After 30 years of service in the armed forces, the Major General is currently the highest-ranking officer of Cabo Verdean descent in the U.S. military; his achievements are evidence of the many ways the Cabo Verdean diaspora continues to connect and enrich our two nations.

We also thank Former Minister Tolentino for his presence here tonight. His numerous posts, including Minister of Foreign Affairs and Defense, have granted him a unique perspective on the role Cabo Verde has played as a partner to United States. His subsequent writings demonstrate the outsized impact a small but proud nation like Cabo Verde has had in the international arena, and I for one look forward to what he will share with us tonight about our historic partnership.

Minister Tavares, we greatly appreciate your presence here this evening as we celebrate the strong bilateral relationship between the U.S. and Cabo Verde.  Cabo Verde is, and will always  be, a strategic partner to the United States, serving as a key interlocutor in regional affairs and in areas like maritime security.

In addition to the interventions by our distinguished speakers, we will also be graced by a special cultural presentation tonight. We are so proud to have Zerui and Gardenia Benrós as our special musical guests. I look forward to their interpretations of traditional Cabo Verdean music like morna and coladera as well as modern styles from both our countries. We know that music has a unique power to transmit culture and bring people together. So we are glad to have this opportunity to showcase not only the historic ties, but also the cultural ties that have linked our people for generations.

And tonight’s gala is just the beginning. The U.S. Embassy and our partners are mounting a yearlong campaign in honor of our 200 years of historic ties. We look forward to the lecture series on U.S-Cabo Verdean relations that the University of Cabo Verde, our co-host for this evening’s gala, will launch this January. The program under the expert director of the Magnificent Rector Dr. Judite Nascimento and the Graduate Studies Department of the university will host scholars from around the world to educate the public on topics ranging from immigration, security, and the role of women in our two nations’ special relationship.

In February, the embassy will host photographer Ron Barboza’s photo exhibit, “Wind at Our Backs,” which features original photographs and archival images chronicling the history of Cabo Verdeans in New England, including Cabo Verdean-American veterans who served in U.S. wars dating as far back as the American Revolution.

And finally, I am excited to announce that in partnership with the Central Bank of Cabo Verde, we will be sponsoring a commemorative coin to mark this 200 year anniversary. In this way, every Cabo Verdean can have a little piece of history in their pocket! These efforts are meant to welcome Cabo Verdeans and Americans of all ages and all backgrounds — students and academics but also business owners, community and religious leaders, civil servants and everyday citizens– to join us, as together we learn more about this important part of our national histories. By understanding our past, we can better understand the role we all play in creating our collective future.

So it is my hope that tonight’s gala will be the start of a year-long effort to celebrate and educate American and Cabo Verdeans about the truth of our longstanding friendship. The truth is that…

●       Our relationship has withstood the test of time.

Now I want you to sit back, relax, and enjoy this beautiful evening.

Merry Christmas and happy holidays to all!