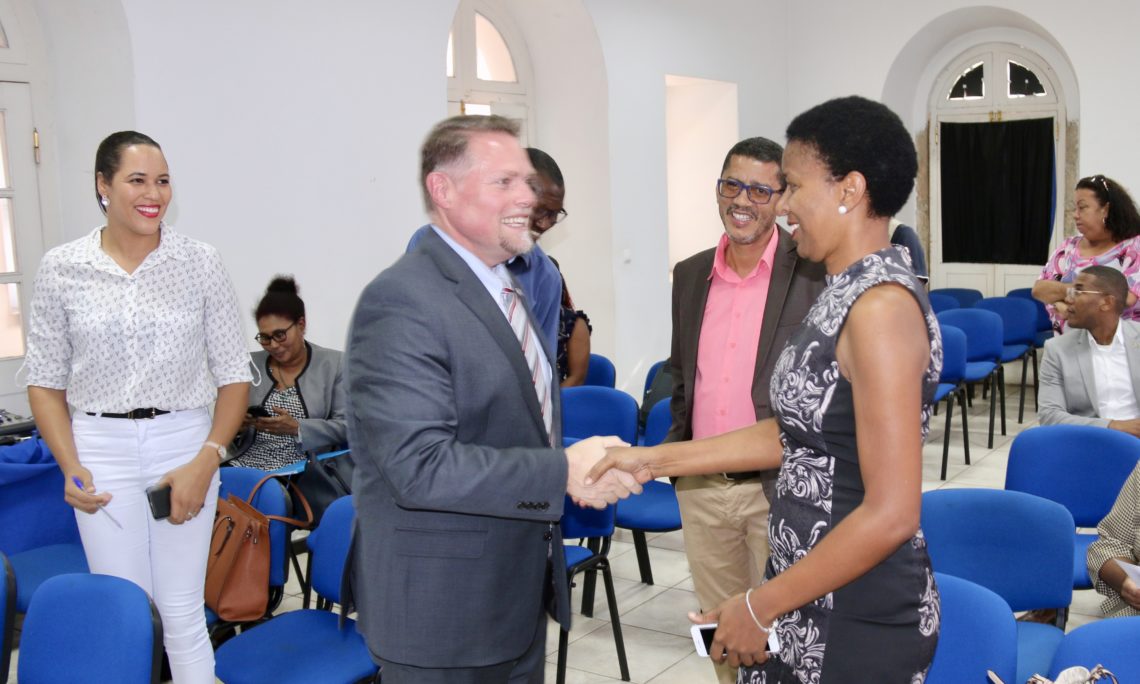 For Public Release (As Prepared)

Opening Remarks at the English Course for Cabo Verdean Journalists

AMBASSADOR DAIGLE: I would first like to thank the Cabo Verdean Association of Journalists (AJOC) for the invitation to be here with you on this important occasion to open the English training for media professionals. We at the U.S. Embassy are proud to work with media through public and private media agencies, government, and associations like AJOC to promote professional development and press freedom. Because of the work of these institutions, Cabo Verde is considered a model on the continent in the areas of democracy, human rights, and freedom of the press. We know a free and professional media creates the climate of transparency and accountability that is needed to underpin economic and social development Cabo Verde is working so hard to achieve. Many might not know that in 2003 the U.S. Embassy Praia collaborated with local journalists to bring Pedro Bicudo as a speaker on Journalism and the Electoral Process. It was the participants of that program who seized the opportunity to relaunch the Cabo Verdean Association of Journalists, creating the strong foundation of current press corps and a lasting partnership with the United States that we benefit from today. For almost two decades, the U.S. Embassy has continued supporting workshops, exchange programs, grants, and visits by U.S experts to
build the technical skills of local journalists. More than 40 Cabo Verdean journalists, editors, and media professionals have participated in U.S. exchanges on investigative journalism, good governance, and elections coverage, sharing best practices with media professionals from around the world.

Today’s training was also made possible by two such U.S. government programs, a U.S. speaker and grant from the U.S. embassy. We commend the leaders of AJOC for leveraging the embassy’s invitation to Dr. Bernardo Motto last June for training in community-based journalism into a broader and more fruitful partnership. This connection has blossomed into an ongoing collaboration that is ready to arm journalists with a key skill – the English language. This partnership through the University of South Florida St Petersburg and AJOC is a key example of what is possible when U.S. universities partner with African institutions to build capacity. The U.S. embassy and the State Department have made developing university partnerships a top priority and we celebrate AJOC and are participants today for joining us in this effort. It is clear that AJOC’s contribution has unequivocally enhanced the local’ media’s ability to engage a larger audience and increase citizens’ access to objective, reliable, and unbiased information about domestic and global issues. And by launching this new English course, you are again paving the way for professional development that will prepare local journalists to better report on the local, regional, and international affairs that impact Cabo Verde. The fact is the U.S. embassy cannot successfully explain our programs and policies to the people of Cape Verde without working closely with print, radio, and television journalists. Whether it is new partnerships with the University of Cabo Verde, our ongoing regional military cooperation, or potential trade and commercial ties to the United States, English language skills will open doors to more information, professional networks, and economic opportunity. But English is a key skill not just for economic or professional development but simply to understand the world around us. English is spoken in over 55 nations worldwide by more than 400 million people, making it the most commonly spoken language in the world. As you all know, English is the language of not just the media industry, but it is also the language of science, aviation, computer technology, global politics, and tourism. These are the issues you cover everyday and the issues that Cabo Verdeans care about because they effect the development of the country.

As a career diplomat, I have spent many years working in the area of culture and media. I have seen first-hand the crucial role the media plays in democracies as the conveyers of information. I am certain that this course will help not only your professional development but the development of Cabo Verde, as the press remains one of the most important players in a thriving democracy like this one. Congratulations to AJOC, to the journalists, and to Cabo Verde! We can’t wait to see the result of this event in the new papers, radio stories, and tv broadcasts in the months ahead.