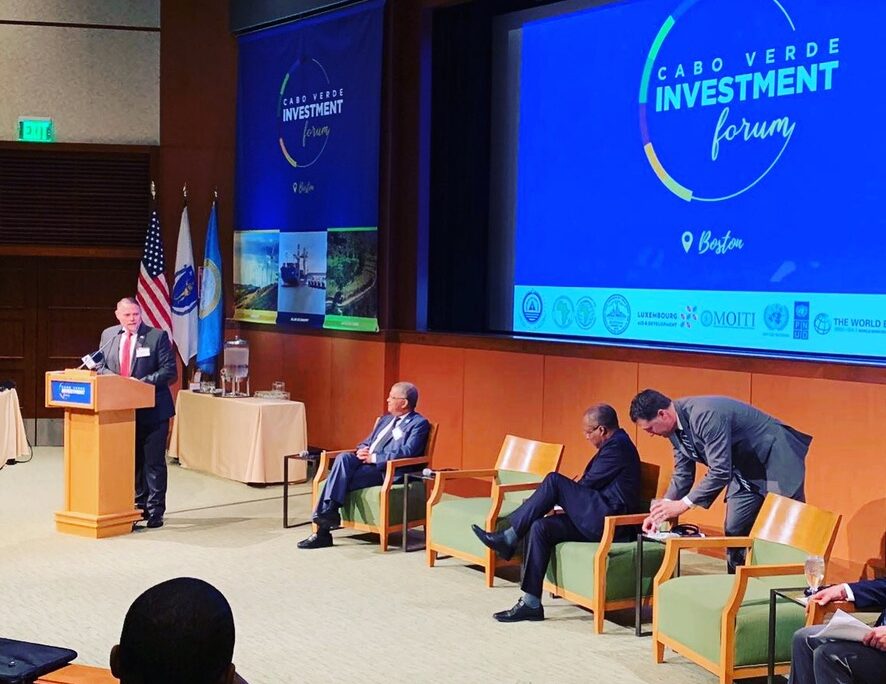 Good morning.  I am very happy to be here in Massachusetts – home to one of the largest Cabo Verdean diaspora populations in the world – to help identify and celebrate opportunities to increase business and economic ties between the United States and Cabo Verde.

I arrived in Praia to begin my assignment as the U.S. ambassador to the Republic of Cabo Verde at the end of July, and since then I have learned much about this dynamic country.

On the map, Cabo Verde appears small.  The total landmass of its 10 islands is about the same size as Rhode Island’s, but its maritime territory – including its exclusive economic zone – is nearly the size of Texas.  Cabo Verde is a country with strong ties to the United States.  In the mid-18th Century, ships from these very waters began to recruit Cabo Verdeans as laborers in the whaling industry.  Cabo Verdeans quickly developed a reputation for being industrious, diligent, and reliable workers, and they began to settle just south of here in communities like New Bedford and Brockton.  Their numbers grew, until today the number of people of Cabo Verdean decent making this region their home rivals the number of people living in Cabo Verde itself.

Over the past year, the United States and Cabo Verde have been celebrating the bicentennial anniversary of our relationship, which has blossomed since the days of whaling into a deep, mutually beneficial partnership in many areas, including maritime security, economic growth, and social inclusion.

Today, Cabo Verde – with its strong democracy, commitment to rule of law, and high investment in human capital – is a powerful stabilizing force in the West African region and within the community of Portuguese-speaking countries.  I think most of you know that Cabo Verde has a stable currency that’s been pegged to the euro since the late 1990s.  It has very low corruption and no history of violent conflict.  Its geostrategic location also makes it the perfect launching pad into West Africa and for trans-Atlantic activities.

In these past three months, I’ve seen firsthand the government’s dedication to harnessing the power of the private sector to develop Cabo Verde in a manner that is equitable, sustainable, and responsible.  I am here today because one of my highest priorities as the U.S. ambassador to Cabo Verde is to further strengthen and deepen our bilateral economic ties.  There are abundant investment and trade prospects for American businesses and entrepreneurs, and I am here with members of my Embassy team to let you know that we stand ready to support you in your efforts to seize these opportunities.

During this forum, you will hear much about Cabo Verde’s three priority economic areas:  tourism, information and communications technologies, and transportation.

Of course, a focus on tourism is a given.  More than 750,000 tourists visit Cabo annually to enjoy the country’s turquoise waters, picturesque beaches, and more than 300 days of sun a year.  That number is constantly growing, with the increase fueled by more than just sun, sea, and sand.  Cabo Verde’s rich music, art, and theatre traditions are starting to attract cultural tourism, while adventure-seekers are drawn to the islands’ semi-active volcano, mountain trekking, sport fishing, and world-class water sports like windsurfing.

Moving beyond tourism, however, Cabo Verde is also home to a world-class data center, NOSi. The country is currently constructing an impressive technology park and has placed solar-powered software development equipment into every high school in the country through its Web Labs program.  Additionally, free Wi-Fi is available in most public plazas, and e-banking is widely used.

Over the course of this conference, we will hear from industry experts how Cabo Verde is also working to become a transportation hub both through its airport in Sal and its ports.  In particular, Cabo Verde has primed its deep-water harbors, in part with U.S. assistance, for distribution, bunkering, and other maritime transport activities.

Above all, Cabo Verde is investing heavily in its youth.  Several Cabo Verdean public institutions work to promote a healthy small business ecosystem, creating an entrepreneurial drive among creative and productive young people.

All this means that your investments in Cabo Verde won’t languish.  The country and its people are qualified and prepared to take advantage of these opportunities.

The U.S. government, in fact, has experience investing in Cabo Verde.  Our Millennium Challenge Corporation, better known as the MCC, identified Cabo Verde early on as a strong partner.  Cabo Verde was the first country in the world to successfully complete two compacts, together worth about $250 million.  We have worked with successive governments on difficult projects, reforms, and investments, and we have found Cabo Verde to be a responsive and valuable partner.

Cabo Verde is also eligible for export benefits to the United States under the African Growth and Opportunity Act – AGOA.  It enjoys similar export arrangements to the European Union.

This small but entrepreneurial economy – poised to serve as a springboard for launching goods and services to Africa, Europe, and the Americas – is a highly attractive partner for small- and medium-sized businesses looking to expand in these markets.  The United States government supports Cabo Verde’s private sector-driven approach to development, and we and other sources are making funding and insurance available to qualified exporters.

We are lucky to have the U.S. Export-Import Bank with us today, and multilateral funding groups like the World Bank.  Like you, we are also looking forward to the new and expanded avenues that the recently-created International Development Finance Corporation will open for U.S. investment in Cabo Verde.

Finally, I want to highlight that the U.S. Embassy in Praia puts specific opportunities in Cabo Verde for American businesses on BIDS.state.gov, and we recommend you check the site regularly for updates and details on specific projects.  The embassy’s Economic/ Commercial team is standing by to support U.S. businesses looking to sell to or invest in Cabo Verde.

I have mentioned several times since being named the U.S. ambassador to Cabo Verde how grateful I am to serve at such an important juncture in our bilateral relationship.  Looking ahead, I see even greater opportunities for mutual trade, investment, and collaboration.  I sincerely believe that the United States, home to many of the world’s best companies and training institutions, will continue to be a key strategic partner for Cabo Verde for years to come.

The embassy team and I look forward to hearing more from you.